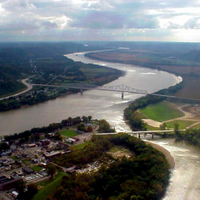 In celebration of the 50th anniversary of signing of the Clean Water Act, Ohio River Foundation, Kentucky Waterways Alliance, West Virginia Rivers Coalition, Three Rivers Waterkeeper, and other organizations in the Ohio River watershed will be highlighting the successes and failings of water pollution control policy in this 200,000 square mile watershed where the Ohio River provides more than five million people their source of drinking water.

When the Clean Water Act was passed to great fanfare in 1972, it was with the goal that all navigable waters of the United States would be fishable and swimmable by 1985. Fast forward to 2022 and we still have not achieved that goal. Nevertheless, we have seen our waterways drastically improve since the signing of the Clean Water Act. Our rivers are no longer catching on fire, and water quality nationwide has vastly improved in many of our waterways.

The most common sources of pollution impacting our waterways are industrial pollution, combined sewage overflows, increased flooding and stormwater events, and acid mine drainage. While the Clean Water Act has largely reduced and regulated these sources, deregulation, loopholes, and novel pollutants continue to threaten the original intent of the Clean Water Act – fishable, swimmable waters. The science, understanding, and technology exist to manage and reduce pollution, but in most cases, it is not a problem of ability as much as it is a problem of political will.

“The health of the Ohio River and its tributaries affects the quality of life and well-being of everyone in the watershed. Approximately 25 million people—or 10 percent of the population—live in the 14-state river basin. More than five million people depend on the river as a source of drinking water. It’s a place of recreation, commerce, and wildlife habitat. We’ve come a long way in the last 50 years, but there is still much work to do to make sure we protect and improve the quality of this invaluable natural resource for current and future generations,” said Rich Cogen, Executive Director of Ohio River Foundation.

Over the next few months up through the 50th Anniversary, the above environmental nonprofits will be highlighting some of the biggest challenges facing water quality in the Ohio River Watershed, and the best ways to protect this integral natural resource going forward. Topics include forever chemical pollution, the proposed petrochemical buildout in the Ohio River corridor, microplastics pollution, nutrient pollution, the regulatory fixation on “the solution to pollution is dilution,” and the associated failure of the pollution permitting regulatory system.