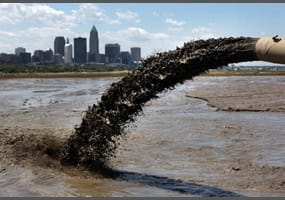 Hundreds of companies discharge pollutants into the Ohio River and its tributaries. State agencies issue permits for this practice under authority granted by the U.S. EPA under the Clean Water Act. The agencies are supposed to determine pollution permit limits using science-based water quality standards and criteria. Often, however, the regulatory approach seems to be that “the solution to pollution is dilution.” Unfortunately, the potential cumulative impact of different chemical discharges on human health, terrestrial animals and aquatic creatures is not well understood. Of particular concern are highly persistent, so-called “forever” chemicals that may be bio-accumulating in our bodies with unknown effects. ORF believes such substances must be tightly controlled, if not eliminated, especially in drinking water that comes from the Ohio River and its tributaries.

In the same way that industrial pollution is controlled by regulators, municipal sewers and associated sewage treatment facilities are regulated as point discharges. When many of our older cities were built, planners installed sewer systems designed to handle raw sewage and convey it to treatment plants. In some cases, they were also designed to transport stormwater – runoff from streets and drainpipes – in one system (called “combined sewers.”) But as cities and towns grew in population, the amount of impervious surface (e.g. roofs and paved areas, such as parking lots and sidewalks) increased. Because rainwater cannot infiltrate such surfaces, it combines with sewage in the pipes, causing direct overflow into basements, rivers and creeks. Many communities are working to reduce these problems through agreements with U.S. EPA. However, progress is slow and expensive. Thus, such infrastructure work must be combined with efforts to reduce stormwater runoff. These include, for example, using permeable surfaces in parking lots, increased use of “gray water” systems, and using rain barrels or cisterns to collect stormwater for gardening.

Runoff from farms is another major source of water pollution. Water leaving farmland drains into streams, carrying excess herbicides, pesticides and nutrients from fertilizers and manure. Some farmers have embraced practices to limit such runoff (such as creating buffer zones around streams or using chemical injection systems rather than spraying). However, many farm bureaus have been staunch opponents of direct regulation of farm runoff.

Suburban and urban property owners also share some responsibility for runoff pollution. Road use results in emissions from vehicle tailpipes and wear particles from tires, and excess herbicides and pesticides wash off property into storm drains and streams. Education of homeowners and builders, along with incentives to limit runoff, should be considered. Use of rain gardens that capture and reduce runoff, bioswales that are designed to capture and treat runoff, convex parking lots (that feed rain gardens and bioswales), permeable pavers and roof gardens are just some of the solutions.

Last, but not least, there is growing evidence that the recent boom in natural gas production using hydraulic fracturing (a.k.a. fracking), is increasing groundwater contamination. The practice also discharges recovered fracking water to local treatment plants. These activities need to be more strongly regulated and enforced. Even if fracking diminishes in coming decades, local populations will be forced to deal with contamination for generations.

Against all of these challenges, ORF works with its partners to monitor state and federal enforcement of existing regulations and laws against polluters who violate the law. We also promote adoption of new science-based water quality standards and other practices and codes to protect and improve water quality in the Ohio River and its tributaries. We are also working to shed a brighter light on especially persistent “chemicals of concern” that are being allowed into our sources of drinking water.