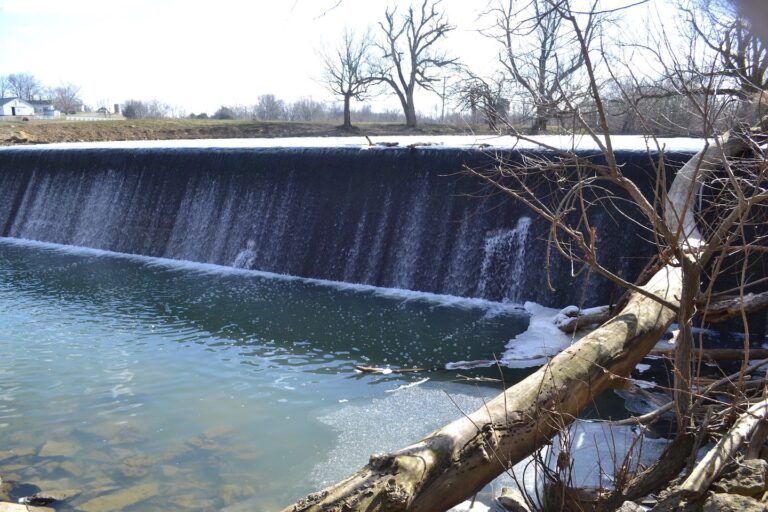 Ever since navigation on the Ohio River began in the 1800s and mills used hydropower for energy, the river and its navigable tributaries have been dredged, dammed, and channelized for both power generation and flood control. These actions have, in many cases, forever changed the hydrology and ecosystems in the watershed, causing some historically plentiful animals, including several freshwater mussel species, to become extinct, endangered or threatened. Furthermore, algal blooms on slow-moving or stationary waters behind dams in areas that were once free-flowing rivers can also endanger humans and wildlife.

Over time, many dams that were built decades ago on the Ohio River’s tributaries have lost their value. Low capacity hydroelectric plants have closed, and flood control dams have deteriorated. To help bring the Ohio River’s tributaries back toward their historic structure and ecology, ORF has worked with property owners, communities and other partners to remove river barriers, such as small dams and low-water crossings and restore both aquatic and stream-side habitat. Our efforts began in 2010 with the West Milton dam removal in Ohio. Since then, we have reconnected more than 200 miles of rivers in Ohio and Kentucky.

As in many parts of the U.S., deforestation was pervasive in our region during the 1800s because lumber was needed to build a new nation. While many areas that were logged have recovered to some extent, deforestation still occurs to make way for development. Cutting forests can have acute impacts (such as runoff from cleared land), and long-term consequences (such as habitat loss and climate change). One solution that should be employed by regulators is similar to the mitigation they require when development impacts wetlands. If an area is deforested by development (industrial, commercial or residential), then the developer should be required to offset that loss by planting new trees nearby to, at least in part, ultimately replace the lost habitat and carbon that is held by the lost forest.

Wetlands have been another victim of developments such as levees, or they have been filled to make way for buildings or parking lots. The value of wetlands has been not fully appreciated until the last few decades; we now know that wetlands act as natural sinks, helping to absorb floodwaters and remove pollutants. Without them, flooding has become more prevalent and its impacts – from property damage to loss of life — more severe.

In Ohio, for example, only 10% of historic wetlands remain. Practically speaking, we won’t be tearing down buildings to put back wetlands. Therefore, it’s critical to protect what is left and minimize the negative effects of loss (“mitigation”). ORF’s first choice is to avoid further wetlands destruction in the first place, favoring development in dry locations. If that’s not possible, then developers should at least be required to create “offset” wetlands nearby, recognizing that such actions are typically not long-term solutions.